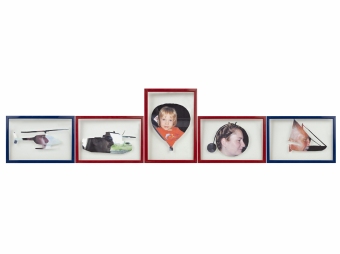 The leitmotif of Pippa Bacca’s artistic research is often the transformation of objects into other objects, usually with the simple use of scissors. In the work in the collection, from the series La verità delle forbici-Variazioni dal rasoio di Occam, (The Truth of Scissors-Variations from Occam’s Razor), various means of transportation (a hot air balloon, a bicycle, a helicopter, a tank, a boat) are shaped and cut out from the photographs of relatives, friends or strangers who have offered a ride to the artist in her various wanderings.

PIPPA BACCA (Giuseppina Pasqualino di Marineo) was an Italian feminist artist who had undertaken, since 1997, the road of performative art. The leitmotif of her art is the transformation of objects into other objects, generally with the simple use of scissors: for example, the photos of the people who gave her a ride in the car are cut up to take the form of a means of transport; crochet is used to create knitwear with phallic or sexually allusive forms; the work Surgical mutations is made up of leaves gathered in a wood and cut so as to transform them into leaves of other plant species. She tragically died during the traveling performance Spose in Viaggio in 2008, in which she proposed to cross, by hitchhiking, 11 countries theatre of armed conflicts, wearing a wedding dress, to promote peace and trust in others. The tragic event has been linked with other crimes and with internal Turkey issues, reopening the debate on violence against women, ruthless ancestral traditions and the alleged “disinterest of justice and society”. *She was born in Milan in 1974, died in 2008 in Gebze, Turkey.