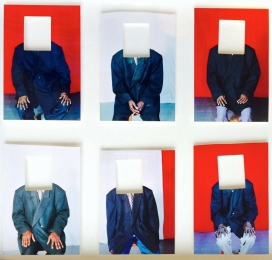 Six chromogenic prints in a single frame. In the oldest photographic studio in Gulu, Uganda, Martina Bacigalupo found a series of 15x18cm color portraits. The peculiarity of these portraits is that instead of a face there is an empty cut-out space. They are the scraps that customers do not take away with them. In this work, the artist redefines the canons of the portrait by shifting the focus from the face, the place designated to represent the identity of the person, to the edges of the photo, highlighting clothing and gestures. The white space leads us to imagine the lives of those who needed an official portrait and for this reason have momentarily given up their everyday “clothes” to put on the more conventionally accepted ones provided by the photographic studio.

MARTINA BACIGALUPO is a visual narrator of stories of social activism. In her style, the rigour of documentary photography converges with the flair of personal aesthetic. She favours black and white film which she alternates with the use of colour, with multimedia and artistic alterations of the images. She develops her series between Eastern Africa and Italy. She works as a freelancer with international NGOs such as Human Rights Watch, Amnesty International, and Doctors Without Borders. In her images she focuses on telling the story of the everyday existence of single subjects, whose personal experience is a symbol of courage and resistance as in Uganda: the Resistance of the Forgotten; Wanawake, To Be a Woman in Congo; Guru Real Art Studio. Among the awards she has received are the “Black & White Photographer of the Year Award” (2005) and the “Canon Female Photojournalist Award” (2010). She is a member of “Agence Vu”. *She was born in Genoa in 1978, she lives between Africa and Paris.