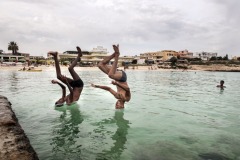 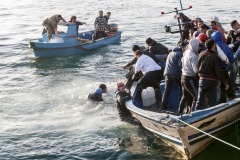 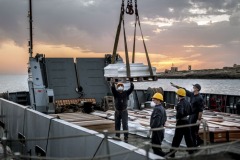 Among Isabella Balena’s most famous photo reportages is the one of Lampedusa on October 3, 2013, when the photographer followed the recovery of the 386 victims and survivors of what is considered one of the most dramatic maritime disasters in the Mediterranean. Balena’s images testify to a commitment and a political and civil passion always participated with great humanity and sensitivity. The 3 color images in the collection tell us of the tragedy but also of the hope of the migrants, and of the humanity of the inhabitants of the island of Lampedusa, that the photographer had already known in the course of other photo reportages shot for Italian and foreign NGOs in previous years.

During the conflict in the former Yugoslavia between 1995 and 1996, Isabella Balena visited the tormented country many times and made several photo reportages that were included in the book Questa guerra non è mia (This war is not mine, a project of the Italian Cooperation). The prints in the collection were chosen from those taken in Mostar and Sarajevo: they are images of destruction and death but also, as always in Balena’s style, suggest hope, resilience and future prospects. 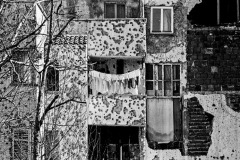 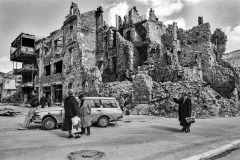 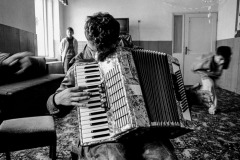 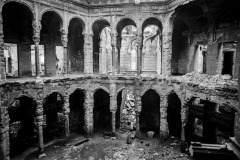 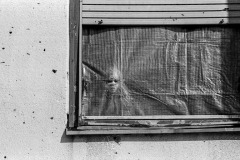 ISABELLA BALENA has been an independent photojournalist since 1991, authoring photo features on war regions including Iraq, Kenya, former Yugoslavia, Sudan, Chiapas and Albania. She has been covering the Israeli-Palestinian conflict and the Middle East, working for many NGOs. In addition to photojournalism she has participated in literary and civic engagement projects. She was involved in collaborations with other artists such as: Ci resta il nome (2004) – a narration about World War II memorials in Italy, from Sicily to the Alps – with cellist Mario Brunello and actor Marco Paolini; SISMYCITY about the earthquake in Abruzzo. Among her photo series dealing with health and preventive measures, is A seno nudo (2012), a series of portraits of women who underwent surgery for breast cancer removal. She has received the “Kodak European Young Photographers” award (1992) and the “Photography for Peace and Freedom” Atri City Prize 2003. *She was born in Rimini in 1965, she lives and works in Milan.