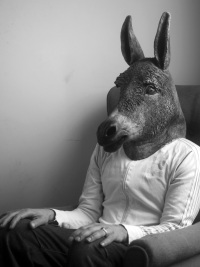 The image refers to one of the silent participants in the performance/conference L’anello e il libro – prologo, realised in Rome at the Palatine, Par Tibi, and Roma Nihil in September 2016, and inspired by the trial of Giordano Bruno. The ass, a favourite image for philosophers, is a symbol of silent knowledge, of possibilities for knowledge; for Apuleius it was a metamorphic path. The photograph takes its title and inspiration from a play for the radio and then for the theatre by Harold Pinter; in it a silent character (on the radio) appears with his face covered by a black balaclava. The silent presence alludes to the idea of a witness but also to that of the subconscious.

In her work Meris Angioletti investigates the relationship between mental mechanisms and linguistic forms, revelation and concealment, film space as a ritual space, all derived from various kind of narrative schemes. Her work (video, performance, photographs, collage, tapestry), has always dwelt in the indistinct space between art and science, a space where it is difficult to distinguish creative process from scientific method. After having studied at the Brera Academy and at CFP Bauer, she was artist-in-residence at Le Pavillon-Palais de Tokyo in Paris and at the International Studio and Curatorial Program in New York. *Meris Angioletti was born in Bergamo in 1977. She lives and works in Paris.