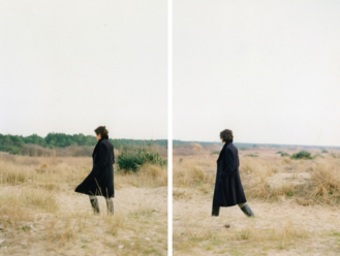 A female figure (self-portrait of the artist) taken from behind in two successive moments, at a distance of one step. The anonymous landscape behind the subject and the neutral light contribute to the laconicism always sought by the artist. The image belongs to the series Dittici (Diptychs) (1997). Portraying herself in the act of walking in a place apparently without references, Paola De Pietri seems to be saying: “in nothingness I seek the material of which I am made”.

In this photo by Paola De Pietri three figures, two women and a man their backs turned to each other sit close together but seem to be distant among them. The situation is incongruous, the atmosphere is suspended, as if waiting. Even the placid, or perhaps rather disturbing, lake landscape does not seem to interest the three characters, while the neutral light of an indefinite hour contributes to the laconicism always sought by the artist. 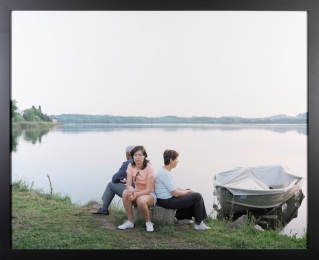 PAOLA DE PIETRI since the 90s has been making photo series and videos on the visible and invisible transformation of existence, exploring the relations and influences of inhabited space in the development of personal and group identity. With a conceptual approach she photographs transience and the effects of time on urban and natural areas in long-term projects such as To Face (“Renger Patzsch Award” 2009) on the places of the battles along the Italo-Austrian alpine front of World War I, a testimony to the passing of time and the slow organic and botanical change of the land dug out by trenches. Her series about the relationship between man and space includes: Trentuno dicembre millenovecentosessanta (2003); Here again (2003); Dormi sonni tranquilli? (2004); La nuova casa (2005); Vajont (2005); Io parto (2008). She alternates small with large format, and black and white with colour. *She was born in 1960 in Reggio Emilia, where she lives and works.