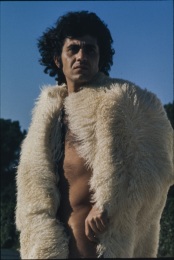 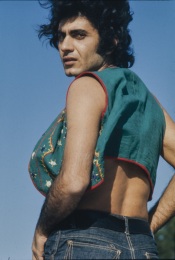 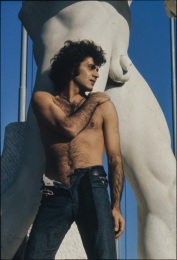 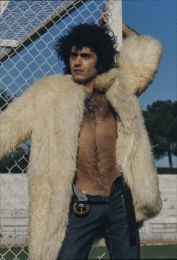 Four colour images of a half-naked man in a model’s pose. They were taken for a novice actor by Agnese De Donato and later became cover proofs for the first issue of the feminist magazine EFFE. Taken by the photographer at the Stadio dei Marmi in Rome in 1973, they were published with the provocative title “Chi era costui? Assolutamente nessuno” (Who was this guy? Absolutely no one). It is the male counterpart to the half-naked women seen on the covers of magazines. The magazine EFFE, founded with other women journalists, was the first feminist magazine in Italy, and the second in the world, after the American MS.

A superimposition of two opposing images by Agnese De Donato: in the foreground, a young woman, a modern revolutionary strides forward, ostensibly showing she’s not wearing a bra, her arm raised in protest representing the fight for feminist emancipation. In the background, a demure, angelic woman, romantically dressed in light-coloured veils and adorned with a crown of flowers proposes a different role model. This image taken in 1970 is considered the manifesto of Roman feminism. 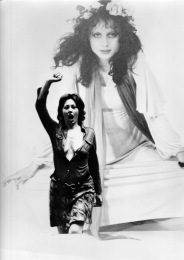 AGNESE DE DONATO, a journalist that got into photography in 1968 after a degree in law, three marriages and her important role in the cultural life of Rome. She founded and directed the bookshop-gallery “Il Ferro di cavallo” (from 1957 to 1966), hosting book presentations and photo exhibitions, a meeting spot for the literary and artistic avant-garde of the era, frequented by visual artists and intellectuals such as Maraini, Levi, Moravia, Pasolini, Fioroni, Burri, Afro, Sanguineti, Pound. She took part in the creation of the feminist magazine “Effe” (1973), working as an editor and cover designer, and realised photo features on issues related to the struggles of the feminist movement. She has worked for a long time doing investigative journalism for newspapers and entertainment publications both in Italy and internationally. *She was born in Bari in 1927, and passed away in Rome in 2017.