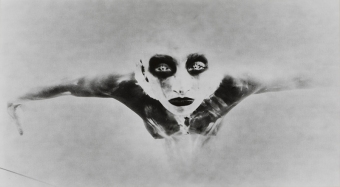 A crude self portrait: according to the artist’s intention an almost ape-like figure emerges from a white background. It is the result of a process of manipulation where the negative image is manually retouched in the darkroom with an original process. Erminia De Luca focuses her research on themes ranging from nature to self-portraits. She achieves original results by using black and white film of very low sensitivity and traditional printing techniques.

ERMINIA DE LUCA, self-taught, between 1994 and 1999 she worked in Puglia and Rome, focusing her research on themes ranging from nature to self-portrait, especially through the use of the negative or special treatments during printing. The Autoritratti were created around 1995 using black and white low sensitivity film (25 ASA) and manipulations still linked to traditional development. *She was born in Puglia, she has lived and worked in Milan since 1968.