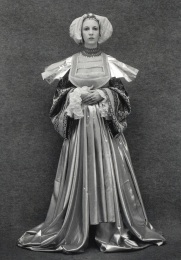 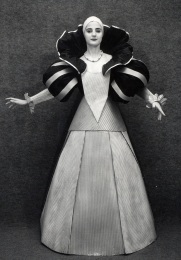 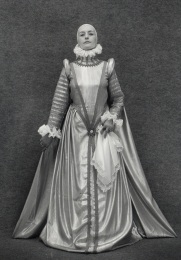 In the series Regalità (Regality), Marcella Campagnano deepens the relationship between image, representation and construction of subjectivity in a visual vocabulary. Each woman in this series is captured while interpreting royal figures, in homage to the great tradition of Western painting, with clothes that are only apparently princely. In fact they are made with cheap, recycled materials, in collaboration with the companions and models of the Academy of Art of Brera. The “paintings” are made as sequences of black and white images taken in home sets.

MARCELLA CAMPAGNANO is the author of L’invenzione del femminile, among the most notable testimonies of the Italian feminist movement, which is made up of the series Ruoli (1974-1980) and Regalità (1985-1989). The Ruoli project was developed through the spontaneous participation of friends and comrades in posing for portraits using make-up, clothes, hairstyles and postures of the social models imposed on women, such as the bride, the prostitute, or the housewife. In Regalità she explores the relationship between image, representation and the construction of subjectivity in a visual vocabulary in which each woman is portrayed while interpreting regal figures, in homage to the great Western pictorial tradition, with apparently rich clothes, but in reality made with poor materials, in collaboration with her companions. Both series were realised as sequences of black and white images taken in domestic sets. *She was born in Milan in 1941, she lives and works in Como.