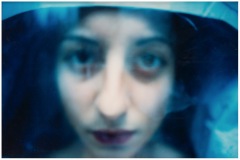 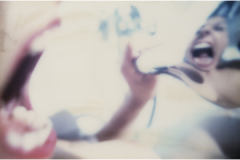 In Giulia Caira’s images in the collection three peculiar characteristics of the artist’s research prevail: the self-portrait, the color blue and the individual psychodrama. Leaving aside any search for self-idealisation, Caira portrays herself mercilessly, in close-up, deformed by the lens, unrecognisable and mysterious.

GIULIA CAIRA distinguishes herself with her interdisciplinary approach, combining skills in sociology, literature and playwriting. She is an explorer of female identity who writes scripts that she transforms into visual stories in movement, to focus on mental idiosyncrasies and behavioural models. Multimedia installations, short films, film stills, self-portraits and still lives are a few of the media through which she creates staged stories and individual psychodramas. Her series include: Le parole nascoste (2009), a video installation on the dichotomy of the identity of nine characters trapped between the stereotypes imposed by society; Evil Sisters (Perfide Sorelle) (2013), a crime news event used as a starting point to tell a story of conflict between women. *She was born in Cosenza on 5 October 1970, she currently lives and works in Turin.