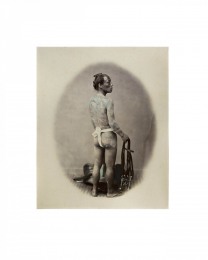 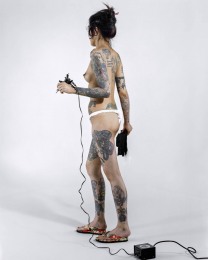 An installation composed of two images: the reproduction of a colour print by Felice Beato on arts and crafts in late 19th-century Japan and the photograph of a tattoo woman artist in today’s Japan. After finding 53 of Felice Beato’s photographs and a travel diary among her family papers, Giada Ripa retraces the same itinerary through today’s landscape, looking for ancient artisans and new trades, tracing a link between past and present, the European vision of an enchanted Japan.

GIADA RIPA: the female figure, the East, and the study of historical events in a dialogue with contemporary transformations are central to her work, realised with colour film. In her photographs against the backdrop of the natural landscape, the artist portrays herself in poses poised between heaven and earth, a visual metaphor of an existential condition suspended between precariousness and change. The recent The Yokohama Project (2014-2016) is the result of the link between the photographer, the album Views, Historical Notes and Native Types of Japan (1868) by Felice Beato and the manuscript of Mathilde Ruinart, her forbear: on their trail, the artist testifies to the social, topographical and anthropological transformations of Japan today. *She was born in London in 1974, she lives and works in New York and Rome.