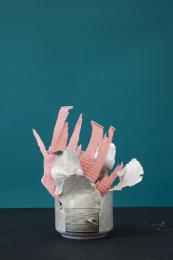 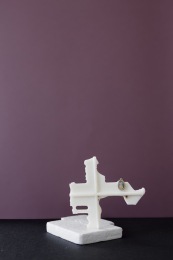 An image of a mysterious object composed of plastic fragments moulded and retrieved from the sea. Photographed by Francesca Rivetti with great accuracy against a backdrop of carefully chosen colours, the object becomes an artefact shaped by the elements and an indirect means of bringing to our attention the major issues concerning ecology and the environment.

FRANCESCA RIVETTI began taking photos in the late 80s. She has worked with advertising and design firms, and handled advertising campaigns for various brands and haute couture labels. Since 2005 she has devoted herself to art. Her first works were inspired by the aniconism of oriental philosophies. She depicts places, things and people as a visual exercise, recalling something that goes beyond the material, from the “emptiness that exists between one thing and another”. Her love for the sea led her to become a free-diving instructor and to realise a series of underwater works. The depth of the sea, the emptiness, the movement and the relationship between real and imaginary become the recurrent elements in her series of photographs. *She was born in 1972 in Milan, where she lives and works.