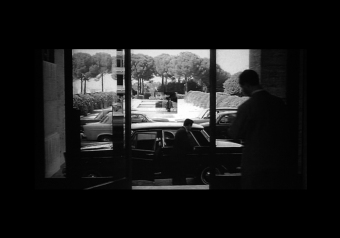 Gea Casolaro offers, new interpretations of reality and the existing image in works that blend together art and current events, with a non-conformist and visionary style. For the series Visioni dell’EUR (Visions of EUR), the artist works with public libraries in Rome collecting private amateur photographs and at the same time views all the numerous films shot in the then futuristic district, often used by the cinema in those years. In Riccardo e i Mostri (Riccardo and the Monsters), the photo of a child sitting at the edge of a fountain selected from an album of a family living in EUR is inserted into a frame of the film I Mostri (Monsters) where the same fountain is filmed.

Gea Casolaro offers new interpretations of reality and the existing image in works that blend together art and current events, with a non-conformist and visionary style. In Permanente Presenza, Casolaro creates a superimposition between a black and white image from the historical archives of the Guardia di Finanza (the Italian Finance Police), who commissioned the project, and a color image made today in the exact place where the first one was taken, precisely identified thanks to the participation of the client that commissioned the work. It is the visionary and nonconformist way typical of the author to give new interpretations of reality and of the existing image. 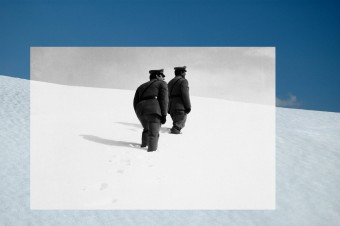 GEA CASOLARO with her non-conformist, visionary style and works that bring together art and current affairs, she offers new interpretations of reality and of existing images, as in Still Here (2013), photo-cinematographic narrations of the relationship between cinema and everyday life in Paris. In recent years, through projects and residencies, she has explored environmental themes, working on the relationship between natural and urban landscapes and the experiences of the people who inhabit them. This led to Prima che la notte duri per sempre, a documentary filmed in 2016 in the towns of the Basilicata region involved in oil drilling; Vivaio Eternot (2016), a permanent installation in the area where asbestos was produced in Casale Monferrato in which the artist has planted the nursery of the “dove tree”. *She was born in 1965 in Rome, she lives and works between Rome and Paris.