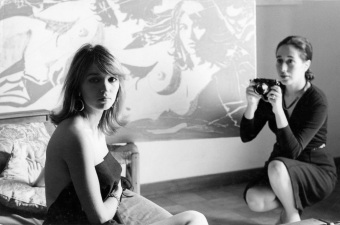 Active in Rome between the 1960s and 1970s by Elisabetta Catalano, photographed extensively the art world scene recording performances, portraying gallerists and artists, people from the cinema world, scriptwriters, directors, actors and actresses.In the series on artists , images of female artists are rare. In this photograph taken in Giosetta Fioroni’s studio, Catalano documents the preparation of one of her works. Fioroni photographs Talitha Getty, for another portrait in the “silver” series, one of which can already be seen in the background.

Active in Rome between the 1960s and 1970s by Elisabetta Catalano, photographed extensively the art world scene recording performances, portraying gallerists and artists, people from the cinema world, scriptwriters, directors, actors and actresses. In the series on artists the images of female artists are rare. In this image Catalano portrays Titina Maselli in her studio in Rome, using a large work by the same artist as a background. 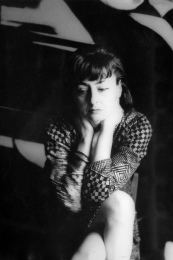 In the 1970s, social and cultural life in Rome was very lively. Many celebrities from the show business and particularly cinema, would attend Cinecittà studios and the Capitoline social scene. Elisabetta Catalano, commissioned by Vogue, intercepted actors and directors of international fame, and photographed them in her studio in Piazza Santi Apostoli. In this image, Richard Harris and his wife Ann Turkel, also an actress, embody the spirit of Rome at the time.

In 1973 Elisabetta Catalano brought together in the book UOMINI (Edizioni del Cortile di Luce Monachesi) a series of portraits of young and already famous artists, among whom Vincenzo Agnetti stands out. The portrait that has become iconic of Agnetti is typical of Elisabetta Catalano’s style: made in studio on black and white film, the artist in a frontal position. 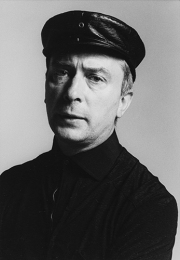 ELISABETTA CATALANO discovered photography in 1963, during breaks of the filming set of Fellini’s “8 ½”, in which she had a small role. She began working for “Il Mondo”, “l’Espresso” and “Vogue”, doing photo features and portraits for the entertainment industry. Working for “Agenzia Studium”, she realised portraits of cultural personalities, high society and the Roman aristocracy. In the 70s she began collaborating with conceptual and performance artists – including Fabio Mauri, Vettor Pisani, Gino De Dominicis – documenting their works and performances, actively participating in the making of ephemeral works that imply the use of photography. Some of her most famous images made for and with Fabio Mauri are: Ebrea (1971), Ideologia e Natura (1973), Il Muro del Pianto (1993). Her books include: Uomini (1973), Tempo di ritratti (1987). *Rome 1944-2015.