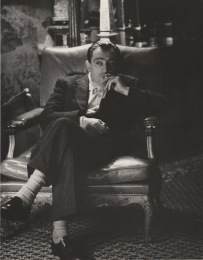 A portrait of Luchino Visconti taken in the famous director’s Roman home. Chiara Samugheo was the first female professional photographer in Italy and photographed all the protagonists of the Italian cinema industry from the 1950s onwards . Her portraits are the simple and difficult synthesis between the posed photo and the snapshot taken on the fly, the result of her magnetic personality capable of seducing the subjects without overpowering them.

CHIARA SAMUGHEO has realised in Sardinia and in Southern Italy photo reportages in black and white that are the expression of Italian neorealism. She has published features on illegal housing, the street urchins of Naples, prisons and psychiatric hospitals for “Le Ore” and “Sud”. Her career takes a turn when she is invited to the Venice Film Festival on behalf of “Cinema Nuovo” and shoots a portrait of Maria Schell. That picture sparks requests for collaboration from magazines all over the world. Her archive contains 165.000 photos, both black and white and colour, shot in her unmistakable style that is capable of capturing the true personality of her subjects off the movie set. All the actors and film directors of the golden years of cinema parade in front of her camera: Clark Gable, Liz Taylor, Alfred Hitchcock, etc. Among her publications are: Sardegna, quasi un continente (1989); Al cinema con le stelle, Cento dive (1995); Fuori dal set (2012). *She was born in Bari in 1935, she lives in Nice.