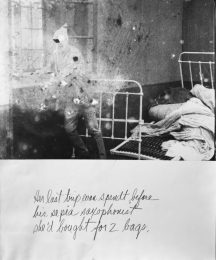 Stephanie Oursler’s work in the collection is part of a series characterised by blurred and superimposed images with comments handwritten by the author that allude to the poetics of the female world. A pioneer of the American feminist movement, Oursler moved to Italy in the early 1970s. She joined the Collettivo di Rivolta Femminile (Collettivo di Rivolta Femminile) with Accardi, Lonzi and Banotti, and contributed to the foundation of the Cooperativa Beato Angelico, the first self-managed space for women artists in Rome.

Stephanie Oursler was a visual artist and political activist. A Black Panther activist in 1966-67, she emigrated in the early 1970s from New York to Rome where she co-founded the woman artists’ group “Cooperativa Beato Angelico” with, among others, Carla Accardi and Suzanne Santoro. Reflected in her work are both ideas that were circulating in the late 1960s in New York, and influences of Roman feminism from the early 1970s. Typical for these contexts, the introspection of the female subject in patriarchal society is for the artist the foundation of both her politicisation and her artistic work. She had collaborated on various occasions with the Art Gallery of Romana.