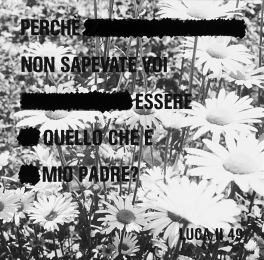 Libera Mazzoleni’s work Why didn’t you know what my father is? is based on a sentence from the Gospel of Luke, whose words here alternately deleted and juxtaposed to an image of flowers open up to different meanings. The symbolic order of the text, exclusionary and misogynistic, disjointed in this way, allows the unpredictable richness of the possible to emerge.

In the series Le streghe (Witches), Libera Mazzoleni introduces her own image among the engravings of the Compendium maleficarum, a Seventeenth century text by Francesco Maria Guazzo. By identifying herself with the persecuted women of the Seventeenth century, the artist breaks down the coordinates of space and time and becomes present in that historical context, chronologically so distant and yet always so topical. 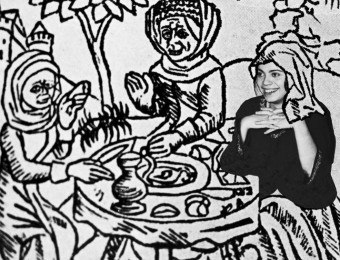 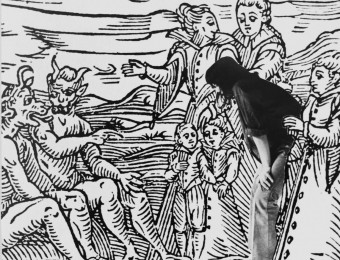 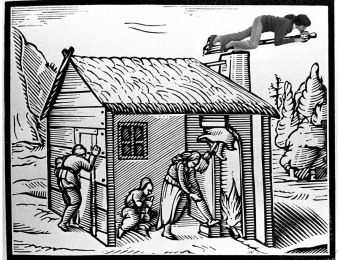 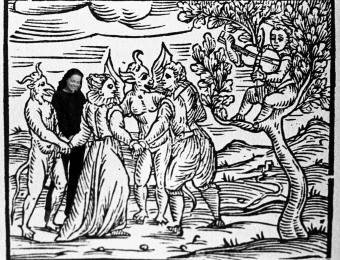 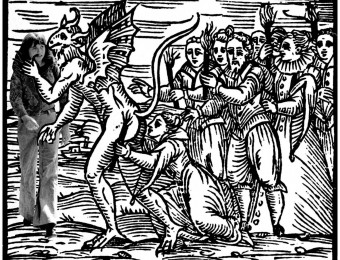 LIBERA MAZZOLENI debuted in the 60s with experiments on the language of sculpture, photography and performance art. She puts at the centre of her work the urgencies of the feminist revolution and gender identity in opposition to the models imposed by patriarchal society. In her first solo show, Oh! La meraviglia dell’esistente! (1973), she exhibited sculptures in polyester that paired details of the female body with phrases written by hand. In 1974 she published the art book Linee Complessi Essere. Among the historic group shows she has participated in are: Magma (1977) and Il volto sinistro dell’arte (1977), where she exhibited the series Luca, II – 49: sixteen photographs in which she crosses out and matched the words of a verse of the Gospel of Luke with different images, to reveal the “excluding and misogynist” aspect of the text and to suggest other possibilities for a liberation from oppression. *She was born in Milan in 1949, where she lives and works.