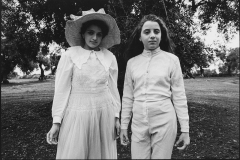 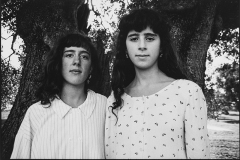 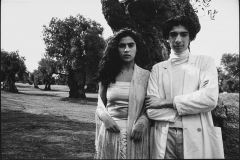 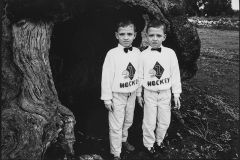 Agnese Purgatorio’s original portrait research is frequently referenced in essays on Italian photography. The four images in the collection of pairs of twins belong to the series with which the artist won the 1994 European Panorama Kodak Award at the Rencontres d’Arles.

Agnese Purgatorio assembles in a digital collage several images from her archive taken during other projects and often already used. For the collection, Purgatorio has combined an old Lebanese propaganda print praising democracy, an abandoned theatre interior (the Petruzzelli in Bari, the artist’s home town) and soil that recalls recent burials. Always referring to a collective drama, Purgatorio’s work is meant to remember the Kurdish martyrs. 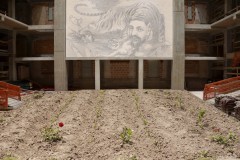 AGNESE PURGATORIO has worked for years around the condition of exile and clandestinity, confronting herself with the idea of real and metaphorical borders, in a vision of history represented as the geography of a body in motion. She has realised digital photomontages with insertions that amplify the meaning of the original image, completing her most important cycles with video installations. In Fronte dell’Est (2007-2014) she replaces the face of some migrants with the faces of artists known for having assumed positions of alterity towards the languages of their time such as Patti Smith, Joseph Beuys, Pier Paolo Pasolini. Among her recent works are: Dalla Clandestinità (2014); Perhaps You Can Write to Me (2010-2014); J’ai utilisé la mémoire (2012), a homage to Armenian women survivors of the genocide; Learning by Heart (2015), a historical reconstruction of the Armenian refugees in Apulia. *She was born in Bari in 1964, she lives between Belgrade and Beirut.