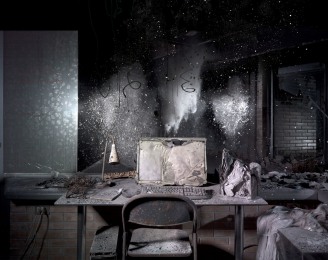 Raffaela Mariniello uses a photographic process in which she balances natural and artificial light. She creates images and video installations on the transformations and contradictions of urban and industrial space with a focus on the Neapolitan area. Still in Life is an image of the Città della Scienza (City of Science) in Bagnoli, Naples after the fire that destroyed it in 2013. It appears that camorra was responsible for the arson of the place after it had been reconverted from industrial site to technological pole: “it looks like a contemporary Pompeii, a place where horror and beauty mix” says Raffaela Mariniello.

RAFFAELA MARINIELLO balances natural light with artificial illumination in her images. She creates images and video installations on the transformations and contradictions of urban and industrial space with special attention to the Naples area. The human figure is absent from her photos, and she favours the use of black and white, which she alternates with a manipulated colour that she herself defines as “non-colour”. Her best-known series include Bagnoli, una fabbrica (1991), a photographic investigation and unique testimony of the activities and closing of Italsider, Moltitudini (1995), Natura morta (1998), Napoli veduta immaginaria (2001). She realises the video Still in Life (2014) on the complex of the Città della Scienza in Naples, destroyed by arson, realised as a creative gesture of redemption and rebirth. Among her collaborations is the art project ARIN (2004) with Daniel Buren. *She was born in Naples in 1961, she lives and works between Naples and Milan.