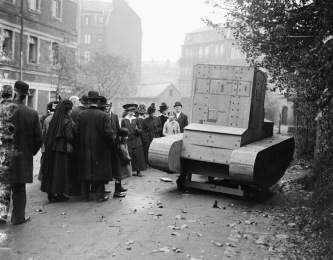 The photograph Authentic News of Invisible Things (Lille) is a reproduction of an image from 1918, kept at the Imperial War Museum in London, which shows a group of civilians, citizens of Lille, looking at a fake tank used by the German army in the First World War to deceive the French enemy. The photograph is part of an installation, which consists of a video in which Rä Di Martino circulates a real tank through the streets of the city of Bolzano to film the reactions of the citizens. The artist invites us to rethink our certainties on what is real and what is fiction.

In Abandoned Movie Sets we see ruins of film sets abandoned in the North African desert. These objects continue their life after filming, becoming public monuments or insidious playgrounds. They are new archeological sites, remains Rä Di Martino uses to examines cinema and history bearing witness to the worlds invented in movies, a parallel universe that demonstrate how reality ages differently from illusion.

RÄ DI MARTINO draws on the symbolic language of the cinema to bring to life videos, photography, film and performance in narrations that enact short circuits and divergences between reality and fiction. She creates projects that are the result of research for archive material to support the creation of tableaux vivants and cinematographic sets in a fantasy staging that takes shape in a sequence of combinations and photograms fused into the film itself. *She was born in Rome in 1975, she lives and works between Turin and Rome.