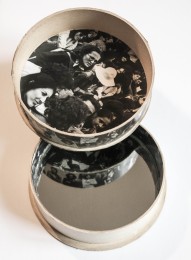 A powder box lined on the outside and the inside with photos of a feminist rally in 1976 at the Palazzina Liberty in Milan; at the bottom of the box is a mirror. The work of art was conceived by Paola Mattioli as a gift for her father. As he looks into the mirror, he finds himself looking simultaneously at himself and at the women photographed, returning their gaze. The work leads the viewer to take a position on feminism with the explicit question inscribed in pencil “What do you think about feminism?”.

PAOLA MATTIOLI has been using photography since the 60s on a narrative and conceptual level, with an approach that reflects her background in philosophy. With a style that is removed from classic photojournalism, she composes photographic projects where each shot represents a reflection on the sense of seeing. She deals with themes that are distant from one another, but united by the expressive power of her camera: investigations on work in factories Fabbrico (2006), Dalmine (2008), Immagini del no (1974), Sara è incinta (1978), Ci vediamo mercoledì. Gli altri giorni ci immaginiamo (1978) on the female condition, to her recent exploration of Africa – in Kenya, Zimbabwe, Senegal and South Africa – with the visual poet Sarenco. Among her projects: Ungaretti (1972), Donne allo specchio (1977), Trieste dei manicomi (1998), Mémoires d’Afrique (2013). *She was born in Milan in 1948, where she lives and works.