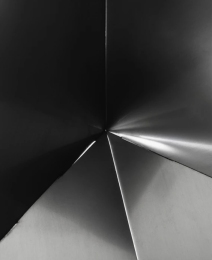 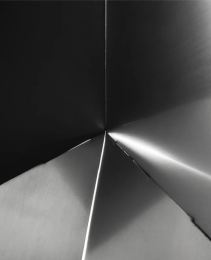 In these two works Lambri explores the world of renowned Brazilian constructivist artist Lygia Clark. In 1960 Clark started to produce art objects that were intended to be manipulated by the viewer: Bicho Invertebrado (Spineless Critters). From 1960 on, Clark discovered ways for viewers – who would later be referred to as “participants” – to interact with her art works. Clark’s work dealt with the relationship between inside and outside, and, ultimately, between the self and the world. This approach impressed Lambri whose practice has lately directed towards the stories of other female artists. These images where part of the exhibition The Shape of Light held at the Tate Modern in London in 2018.

Luisa Lambri explores the spaces of contemporary residential architecture, interpreting it in an abstract way. She deconstructs architecture, turning her lens from the inside to the outside, isolating architectural details, transitional spaces, enhancing the relationship with light until walls and spaces loose consistency. This photograph shows a detail of Villa Tugendhat, a masterpiece of Czech rationalism built in Brno between 1928-1930 by Ludwig Mies van der Rohe. The villa is one of the most representative buildings of modern architecture. 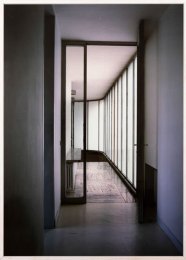 LUISA LAMBRI explores the spaces of contemporary residential architecture by interpreting it in an abstract way. She began her career in the 90s, creating photo series of the most iconic buildings of the 20th century masters – Le Corbusier, Mies van der Rohe, Alvar Aalto, Oscar Niemeyer, Frank Lloyd Wright, Luis Barragan. These were followed by cycles exploring the environmental works and installations of the artists of the “Light and Space” Movement in Southern California, such as James Turrell, Robert Irwin, Donald Judd. Inside a world built mostly by men, her female gaze transforms space into experience. With a subjective and poetic vision, she deconstructs the architectures, turning the focus from the inside to the outside, isolating architectural details, spaces of transition, exalting the relationship with light. *She was born in Como in 1969, she lives and works in Los Angeles.