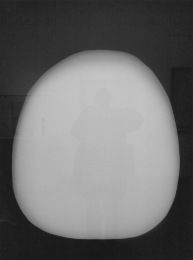 The work is part of a series called Riflessioni (Reflections) for which Bruna Ginammi, in search of her lost identity, creates a self-portrait by reflecting herself in the work of another artist, in this case in a work from the 1960s by the feminist artist Dadamaino. Dadamaino’s work Volume, with its oval shape and colour, recalls the womb, the placenta that nourishes and regenerates. Rinascita (Rebirth) has a precise date in Ginammi’s life: 21 November 2014. That day marks the end of the artist’s absence from the art world for a period of 7 years devoted to raising her son.

Bruna Ginammi uses photography to investigate herself and the world, often with reference to myth and classicism. The pair of images Epimetheus and Pandora, the couple of the first dawn of the world in Greek tradition, belong to the series Mutatis. In this work Ginammi speaks to us of nature denied in our contemporary society. She does so by portraying arboreal bodies on a red background, producing minimalist images, stripped down to the bone. A quest to remind us of what we are losing and to reveal to us what is hidden in our culture and tradition. 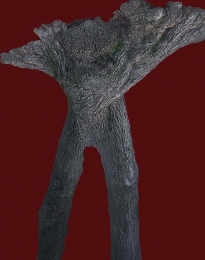 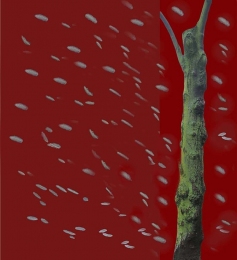 In the three images that make up the work, Bruna Ginammi sublimates the conflicting feelings that her mother’s illness inspired in her and photographs the remains of her haphazardly abandoned lunch. In the black and white triptych, a table set for a potential banquet appears. The whiteness of the tablecloth is transformed into a shroud; moreover, its folds and shadows visually recall notes sketched on a pentagram, an imaginary symphony of a relationship between mother and daughter. In the sequence, the field of the image narrows, the dark parts are accentuated, the wall of shadow, a black triangle, tells of a palpable void, a concrete absence. In the white area, a melon, a succulent fruit by nature, rich in water and a symbol of life, stripped of its protective skin, lies naked on the plate. The meagre elements of the visual narrative tell of a feast not consumed, of its simulacrum, and underline the trace of a missed act, of a declared absence.

Often Bruna Ginammi refers in her work to the closest ties, to the relationship with members of her family. In the triptych featuring her still-child son, Ginammi jokes with the motto of the three wise monkeys who block up their eyes, ears and mouths with their hands. There are multiple meanings attributed to these monkeys and to the proverb, associated with being of good thoughts, good words and good deeds. 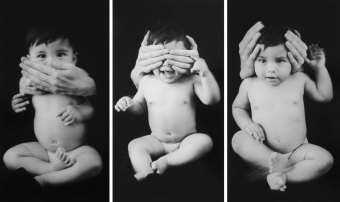 BRUNA GINAMMI has an eclectic style capable of overturning expressive codes through the use of different visual languages. In her first staged photography works, she showed herself in the representation of classical and literary myths as in La ricerca del Santo Graal (1996), in the video Ophelia’s awakening (1999), in La nascita di Venere (2000), and in Rinascita (2014). She reflects on the theme of identity, change and relationships with images that have the body and the interpersonal ties as their subject in the cycle Famiglie (2000) and in Atlante Umano (2016), portraits of people with body piercings and tattoos that the artist uses as signs to build an atlas of personal relationships. She creates cycles of photographs featuring a visionary relation with space, such as Cielo e mare (2002) and Quando i muri diventano strade (2016). In 1995 she received the “European Kodak Panorama Award” and took part in the Venice Biennale. *She was born in 1964 in Bergamo, she lives and works in Milan.